For I Saw Sunday Week 13
http://isawsunday.blogspot.com/

– Watched my oldest daughter, very methodically dismantle my old computer and set up the new one, in a matter of just over an hour. Then spent several hours just playing with and exploring the new system. Much larger flat screen monitor, which is wonderful but still needs some getting use to. Had one problem with the USB cord for the new printer, scanner. It was the one that had been recommended, but it didn’t fit the portal. The old one did, so now we have to mess with returning the other one. That really was the only hitch in the process. Other than me, lol. Although I have owned and operated a computer for almost thirty years, my techno skills are still very limited to word processing, and internet surfing. Just trying to figure out how to pull up what is an everyday thing, was a bit frustrating.  I just kept telling myself that in a few days, all of this would be normal and old hat. Sure, it will be, lol.

– My first Christmas present arrived in the mail. A box from a friend who lives in Albuquerque, New Mexico. She sent me a very pretty and delicate necklace, of tiny beads interspersed with small chips of stone carved into the shapes of birds. She also sent me a wonderful little statue of a bear in Native design with a paw print hand painted on his body. 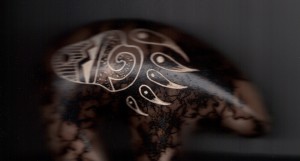 – The bear now resides prominently atop my new puter tower. His name is JB and he is a talisman for introspection.

– My friend and I often IM one another and chat about everything imaginable. We exchange photos and pics. She does medical supply deliveries to far flung places, often taking her camera along with her. These are just two of the images she shared with me yesterday. 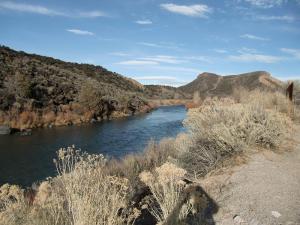 They reminded me of several road trips taken many years ago, to Montana and driving alongside the Yellowstone River. And are in complete contrast with the ten inches of snow that have fallen here in the last twenty-four hours. One of the best advantages of living in a well-maintained apartment complex; snow removal is someone else’s headache. Whew! I get to enjoy the freshly softened contours of the outside world, without having to bundle up and go out there to shovel it.

– Not to be outdone, I shared my two most recent Mandalas with her.

– Meanwhile, my week was filled with ever more words. I am now working on the seventeenth page of the twenty page manuscript formed by the PAD Challenge in the month of November. It has been an exciting, as well as enlightening process. Some of the poems have been blended together, others only tweaked, while still others are brand new to fill in holes that were not covered by the daily prompts. It has meant totally closing my mind to Christmas shopping. That will be a rush taking place next week. But, have also taken the time to relax and watch a couple of movies on this wonderful new monitor. My daughter and I watched Toy Story III, and she was upset that she was brought to tears by a cartoon. I loved the movie because it was all about not letting go of the inner child that exists in each of us. We also watched Alice In Wonderland. I really like Johnny Depp, and wasn’t disappointed in his portrayal of the Mad Hatter. The visuals in the movie are quite incredible and well worth seeing.

– Had a far more vocal day, yesterday, than visual. Phone calls from Arizona, New Mexico, and three from different cities in Wisconsin. Guess everyone was thinking about me at the same time. That was a very good and comforting feeling.

Hope you join us for I Saw Sunday, next week.